However, applications like BuhoCleaner need some system privileges to get their job done. In particular, it requires admin permissions to perform the following tasks:

That’s why, when you try to run some of these BuhoCleaner tasks for the first time, you see this dialog: 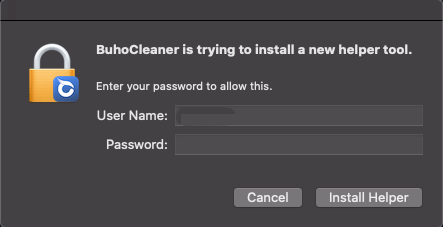 BuhoCleaner asks you to provide your admin password - the same one that you use to log into your macOS account. This allows BuhoCleaner to install its Helper Tool. Basically, the Helper is an agent that receives permissions from the system to perform the above listed tasks.

Dividing an application into the main part and a helper is a standard technique provided by macOS to make communication between the system and applications more secure. In particular, the application becomes less vulnerable to hacking attempts because its privileges are distributed between two separate units that make little use without each other. In other words, after you install the helper, the application itself doesn't get additional privileges and cannot access your Mac without verification from the helper. Meanwhile, the helper has these privileges only and cannot run separately without the main app.

During installation of the Helper Tool the following files are created in your system:

If you are still in doubt, note that you can uninstall the Helper and take back its privileges at any moment.

However, if you uninstall the Helper or cancel its installation, some BuhoCleaner functionality may be not available and a cleanup session may fail. Also, next time you try to run some task that requires special privileges, you'll see the Helper Tool installation dialog.

Don't have BuhoCleaner yet? Get it here →